February 9th was “National Pizza Day,” so it only seemed fitting that we had pizza night this weekend! Homemade pizza night has always been one of our favorite (and cheap) date nights, but we actually haven’t had once since before we were married. Since it was a rainy Saturday, we decided it would be a perfect evening to break out the pizza stone in the new apartment!

We usually buy the pre-made pizza dough from Kroger or Publix, but I had heard a lot about cauliflower crust as a dough substitute. I wasn’t able to convince Grant, but I did decide to give it a go on my own pizza. We had bought cauliflower rice from Costco, which is essentially just finely chopped cauliflower florets. I steamed 2 1/2 cups of the riced cauliflower in the microwave for 7 minutes as the package directed. Next, I wrapped the steamed cauliflower in several paper towels to squeeze out the excess water. 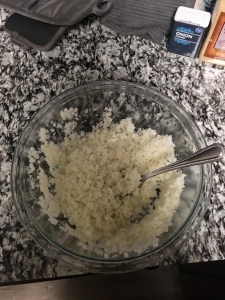 After getting out as much of the extra water as possible, I mixed in one egg, oregano, salt, garlic powder, and mozzarella cheese. Once the mixture comes together, I shaped it into a circle resembling a pizza on a cookie sheet lined with foil. The recipe called for parchment paper, but since we didn’t have any, I had to improvise! 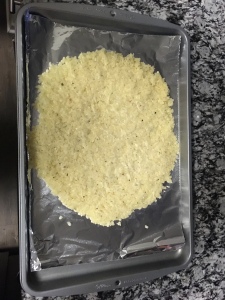 I baked the crust at 400 for 20 minutes before taking it out to officially assemble my pizza. I let it cool for a few minutes and then coated the crust with a mixture of olive oil, fresh garlic, and oregano. From there, I added my favorite toppings – Greek olives, portobello mushrooms and goat cheese and finished it off by topping it with a lot of mozzarella cheese!

Back into the oven for another 20 minutes, and after a brief cooling period, it was finally ready to try! Appearance wise, it looked (and smelled) delicious!

The foil instead of parchment paper proved to an issue when it came time to remove the pizza. It stuck a good bit, but with Grant’s help, we were able to cut a few pieces and transfer them to a plate for dinner. Next time, I plan to make the crust a little thinner. It didn’t get super crispy this time, and I had to eat most of it with a fork and a knife. Overall, the flavor was really good and I felt just as full as I would with real pizza crust (though with a fraction of the carbs and calories!).

Final consensus, definitely give the cauliflower crust a try if you love pizza but are looking for an alternative to the traditional gluten crust. I recommend making the crust fairly thin and using parchment paper. If you love picking up your pizza and a thick crust, then this crust probably isn’t for you (AKA Grant). Check out the full recipe I used here: https://www.google.com/amp/s/www.foodnetwork.com/recipes/katie-lee/cauliflower-pizza-crust-2651381.amp