For those of you who don’t know, Grant and I met on a European studies trip to Italy and Greece nearly ten years ago! My great grandfather on my dad’s side came over from Sicily, Italy, so you could say Italy has played an important role in both of our lives! When we were deciding on a rehearsal dinner location, we had one of the best Italian meals (that wasn’t in Italy) at Tuscany Italian Restaurant in Woodstock. After gorging ourselves on a sampling of basically the entire menu, the owner sat down with us for a celebratory toast of limoncello. Limoncello is an Italian lemon liqueur, mainly produced in Southern Italy. Traditionally, it is served chilled as an after-dinner drink. I love all things lemon – lemon bars, lemon Italian ice, and limoncello! For whatever reason, I decided to see how it was made and found out that it is surprisingly simple! Being the patient man he is, Grant indulged me and agreed for us to give it a try at making some homemade limoncello this weekend.

We started off by gathering all of the necessary ingredients: lemons, alcohol (we went with vodka), and a large glass jar. After a visit to Costco to purchase the biggest bag of lemons I’ve ever seen ($6.99) and a 1.75 liter bottle of their private label vodka ($13.99), we grabbed the final item – the glass jar – from Target ($5.79), all in all spending less than $30 dollars! There are a lot of recipes out there for homemade limoncello, but this is the one we decided to follow with a few tweaks: http://theitaliandishblog.com/imported-20090913150324/2012/7/3/how-to-make-homemade-limoncello.html

You start off by zesting or grating the lemons. I used ten lemons and alternating between using the large grater for thicker peels with the small zester to get the hard to grate edges. A word of caution that every recipe says: make sure to no zest the white pith of the lemon or else it will be very bitter. 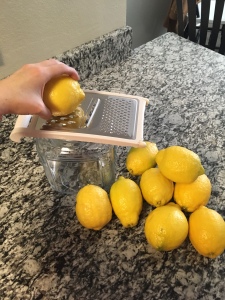 It took a good 30 minutes to grate and zest all of the lemons. Once they are settled into the glass jar, you add one liter of alcohol. Some recipes call for Everclear, others call for vodka. Vodka was more easily accessible and cheaper, so that’s what we went with! Costco has some awesome deals on both their private label as well as other national brands. TLB tip: you don’t even have to be a Costco member to go to their liquor store!

Once we sealed the jar up tight, it goes in a cool, dark place for the next 7-30 days (we read differing reviews on this one, but plan to err more on the longer side of it). At that point, you make a simple syrup to add to the lemon/vodka mixture. TLB tip: use the leftover grated/zested lemons to make lemonade, lemon bars, or infuse into water.

Stay tuned for part two of our limoncello making adventure! Keep your fingers crossed for us that it turns out!